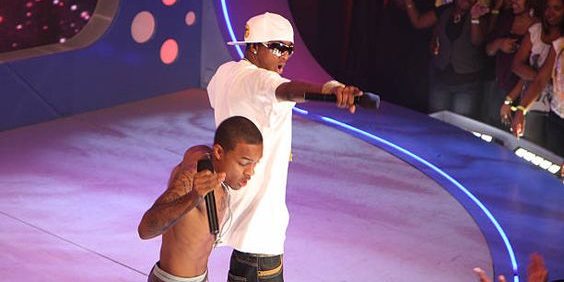 Before the days where music videos were accessible by a tap on your smartphone, BET hosted a variety of shows such as “Video Soul”, “Planet Groove,” and “Rap City” that all served as go-to avenues for the latest in music and Black pop culture.

Despite BET’s long-term success, there remained a void for music programming catering to the generation born after the Run DMC’s but who couldn’t see themselves while watching MTV’s “TRL”.

Named after the original studio location at East 106th Street and Park in New York City, 106 & Park instantaneously became the place to be for Black Millenials five days a week.

Hosted by Marie “Free” Wright and AJ Calloway, 106 & Park was more than just your typical countdown show. 106 amplified the voices of Black celebrities, Black culture, and the Black youth who lived it.
One of, if not the most beloved 106 & Park guest of all time is Shad “Bow Wow” Moss.

With co-signs from industry legends such as Snoop Dogg and Jermaine Dupri, the So So Def artist had already shaken the music industry with his debut single “Bounce with Me” and his undeniable talent and stage presence.

Small in stature, Lil’ Bow Wow was filled with the charisma that Hip-Hop hadn’t witnessed before in an artist of his age. His male counterparts respected him, the girls loved him and it was crystal clear that Lil’ Bow Wow’s reign would not let up anytime soon.

Bow made his first appearance on 106 & Park on November 8, 2000. From the blaring screams from tween girls in the audience to the young boys who rocked their bandanas to mimic Bow’s look, the star power was apparent.

That first appearance would be the onset of a long-standing relationship between Bow Wow and the BET hit show.

As Lil’ Bow Wow’s star continued to rise, the success of his sophomore album “Doggy Bag” and the launch of the infamous Scream Tour franchise, the Lil’ Bow Wow and 106 relationship ushered in an entire generation of artists including B2K, Jhene Aiko, Mario and eventually Chris Brown and more, who would all come into their own and capture the hearts of fans all over the world.

In 2005, host Free and AJ abruptly left 106 & Park and their spots were filled by various broadcast personalities until ultimately Terrence J and Rocsi Dias scored the coveted positions in the summer of 2006.

While the new hosts left a sour taste in the mouths of some initially, the brand that Bow helped build, continued to stand strong due to appearances from the beloved rapper and actor.

By 2006, Bow Wow had dropped the “Lil” from his name and was riding the success of his 2005 release “Wanted” which produced hits such as “Like You” and “Fresh Az I’m Iz”

Outside of music, we witnessed Bow grow as an actor appearing in films like “Roll Bounce”, “Madea’s Family Reunion”, “Lottery Ticket” and more. His success on the big screen made him the obvious choice to take the reigns as the next host of 106 & Park. In 2012, Bow Wow returned home to BET and was officially named as one of the host of 106 along with Paigion, Shorty Da Prince and Miss Mykie. Ultimately, Bow Wow would host 106 with Candian singer and actress Keisha Chante until its final episode in December of 2014.

As the state of music and Bow Wow’s career evolved,106& Park always served as a place of solace for the star.

In the 20 years since the debut of both 106 & Park and Bow Wow’s first album, we’ve been along for the ride to see Bow go from sold out tours, movies, television shows, messy relationships and even fatherhood.

In 2020, Bow was asked by Twitter if he would participate in the popular #Verzuz series.

“Na, I was just part of a good era and music. I wasn’t THAT important. Lot of big acts were dominating the 2000’s”, he replied.

The undeniable impact that Bow Wow and 106 made on the music industry and the millions of young Black girls and boys who finally saw themselves through the music and the platform can never be erased. It was THAT important. Every hero has their origin story, and for many 106 & Park serves as that origin story for Bow Wow.

Love reading about our creative legends and legendary moments? You’ll love this read.

Ashleigh is the epitome of a Black pop culture junkie. Versed in everything from Black beauty shops, to Beyoncé, she is passionate about all things surrounding the Black experience. An R&B music connoisseur, music has always been her first love. An advocate for creatives, she is the founder of a boutique PR and digital marketing agency where she specializes in creating exceptional storytelling campaigns for entrepreneurs and small businesses in various creative industries. Twitter: @ashleighcreativ Instagram: @ashleighcreative

Dr. Maya Angelou and The Danger of Modesty – a lesson for creatives
September 13, 2020

When You Talk About Ownership in the Hip Hop Community – Don’t Forget Master P
May 14, 2020

DJ D-Nice Is Saving The World With Black Creativity via His #ClubQuarantine Party
March 22, 2020

Sign up for our newsletter
Keep Going
Go to Top