To Eric Jerome Dickey, With love from #blkcreatives 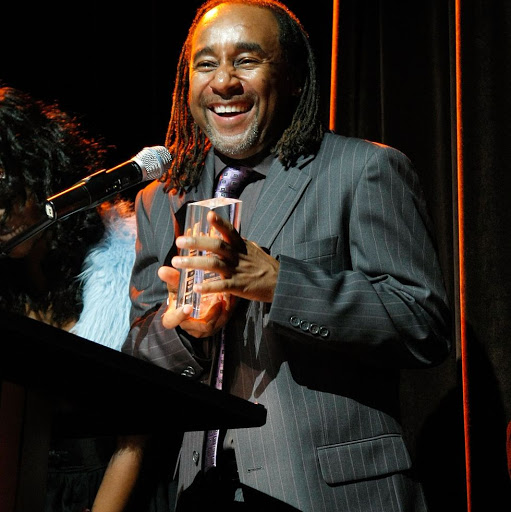 Beloved novelist Eric Jerome Dickey’s passing moved swiftly through social media, unsurprisingly. A New York Times bestselling author, with dozens of novels under his belt, Dickey’s work was loved widely here at home and abroad. His final novel, The Son of Mr. Suleman, will be published posthumously in April 2021. I’ve already pre-ordered my copy. Though he previously pursued careers in tech and entertainment, which I learned only recently, writing is the career that stuck and that will remain his legacy. His writing career is certainly what impacted me.

His first novel, Sister, Sister, drew attention to him early on.  When I took to Twitter, as I often do after these deaths, I was drawn to tweets from other millennials who shared stories of sneaking his books around like contraband. My introduction to Dickey’s work was Milk in My Coffee, a portrait of interracial romance, racial identity and sexual intimacy. I was in middle school when it came out. It’s safe to say I “shouldn’t” have been reading that book. But I did, and I loved it. Up until that point, I’d never read anything like it in terms of subject matter. I was a voracious reader and can’t tell you how I discovered it (probably the library!), but it always stuck with me.

When I flipped past the final page of Coffee, there was the author’s bio – and his email address. I’d never seen that before. I don’t recall a thing I said, but I still remember plopping down in my chair, logging onto AOL, carefully typing in his address and writing to an author to tell him how much I loved his book. The ‘90s, what a time!

And to my surprise – and delight, even 20-plus years later – Eric Jerome Dickey wrote me back. To write a letter to an author, a creator of treasure, and have that author write back – it meant everything to me. I felt seen, I felt heard, I felt appreciated. Hindsight is 20/20 as they say, but I wish I had printed and saved that email. The memory will never leave me though.

Sharing my encounter on Twitter and reading other people’s stories, I learned this wasn’t uncommon for him. This didn’t make me feel any less special – all it did was make me appreciate him more. That he took the time to connect with the people he wrote for and whose lives he touched speaks to his good nature. I don’t read much fiction these days, but I looked him up years back on Twitter and followed him. We engaged a couple of times, but more than anything, I watched how engaged he was in general – with the platform and the people.

It’s always bittersweet to appreciate something or someone once they’re gone, but reading other people’s stories had me feeling a mix of joy and sadness. I giggled as I read about other folks my age, sneaking around his books.

For many of us, Roxanne Gay included, his were some of the first novels we read about Black people that weren’t about slavery or civil rights. I felt a twinge of sadness thinking back to the ‘90s,  how I had no one to share the experience of his books with when I was younger. I probably had a handful of Black classmates during my K-8 years, only one or two I would have possibly mentioned this book to in 8th or 9th grade.

I never thought about his larger impact – because his work was always so personal to me, the girl who didn’t have anyone else that looked like her in her class. While others rushed to meet their friends in hallways and ask if they’d finished his latest release (which they often took off their mother’s shelves), I read his work and processed it internally. The only “Black life” I knew was my own and that of my close relatives. His words exposed me to new ideas, thoughts and ways of living and being. I didn’t realize then that Black girls (and boys) around the country were also going through their own literary journeys, guided by his work.

"Eric Jerome Dickey's words exposed me to new ideas + ways of living and being. I didn’t realize then that Black girls (and boys) around the country were also going through their own literary journeys, guided by his work." @AlaiaWilliams for… Click To Tweet

As I quickly moved onto his next new books, Cheaters and Liars Game, then eventually doubling back to his first two books, I noticed that women were often front and center in Eric Jerome Dickey’s work. His writing was fresh, contemporary, vivid and smart. His characters were complex, saucy, funny, compelling. Older readers (you know, the age-appropriate ones), often found themselves surprised that a man wrote these characters. Picking up his work at a young age, for me, it set a tone – a high bar.

As I got older and picked up new books, I’d wonder, why weren’t more men writing fleshed-out female characters?

Why didn’t other male writers have the grasp that one did?

“These days, there are three things you can count on for sure: The sun will rise tomorrow. It’ll rain somewhere in the world. And author Eric Jerome Dickey will tell a good story,” Terri Schlichenmeyer wrote in a review of one of Dickey’s last novels. And tell good stories he did.

2020 was a year of uncertainty. In uncertain times, we look for comfort and familiarity. For the last decade or so, I’ve struggled to read fiction, pushing myself to focus on books that would contribute to my personal and professional development – not just pure entertainment. But last year was different. I gathered up old Babysitters Club books and tracked down some of my favorite elementary school reads (Trumpet of the Swan, anyone?). The adult novels I reached for? Eric Jerome Dickey’s. Those purse-sized (but THICK) mass market paperbacks with bold colors and vibrant illustrations, pages full of characters doing and saying things I’d never done (at 13 anyway…) – they helped bring that comfort, they were something I could count on.

And it’s amazing what one email can do. Something he probably never thought about again, I thought about every time I saw one of his tweets or one of his new books on a shelf. Whether through his books or how he took the time to engage, he made people feel seen, valued and inspired.

Eric Jerome’s final novel The Son of Mr. Suleman releases on April 20, 2021. You can pre-order it here via Bookshop* (an affiliate link). Here’s a tribute to another one of our beloved writers.

About the Writer: Alaia Williams is a business consultant and freelance writer. At any given moment, you can find her living her best-introverted life, surrounded by books, vinyl records and one too many houseplants. You can learn more about her at alaiawilliams.com/about