Lisa Beasley on her Twitch show, The Blunt Doctor 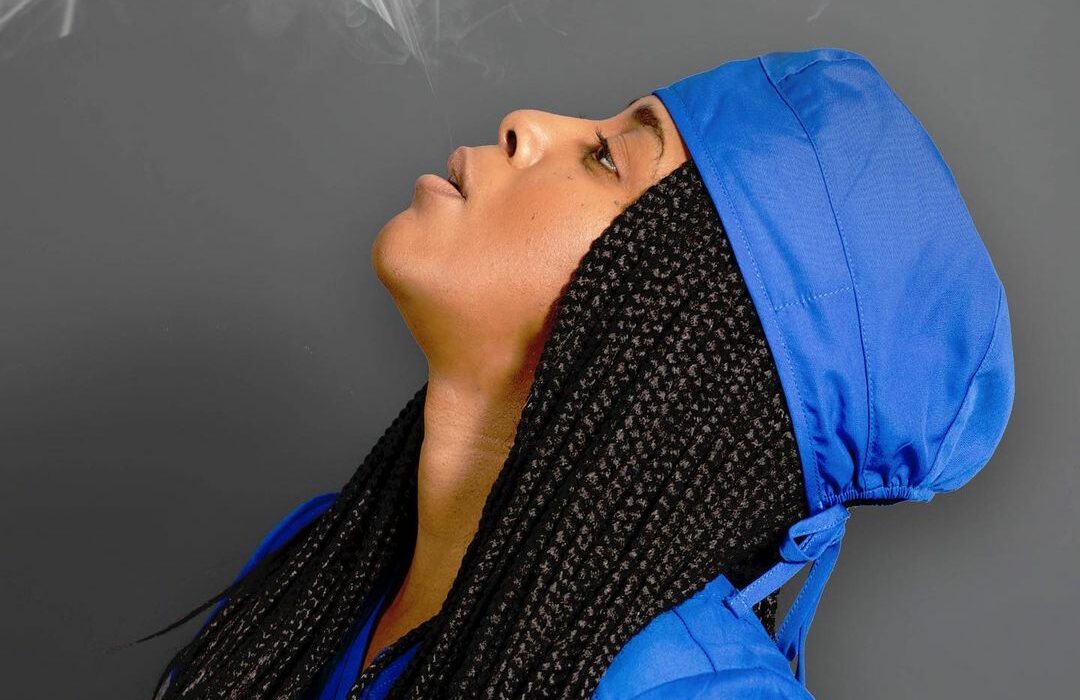 You may have watched Lisa Beasley go viral with her #Margaret Thatcher of The Crown impersonation or seen her video as Beyonce’s graphic designer but what you may not know is that the Chicago-based creative director, comedian and actor ain’t new to this at all.

Outside of her long-ass history of performing on stage (even when she was pregnant!), she’s also gone viral with 3Peat Comedy, a collective of Black improv, stand-up, and sketch comedians, and #Wakandacon (she is a co-Founder) which has constantly made national news.

“This time, what you really see in my viral videos is a Black woman having FUN,” Lisa shared in this tweet. “Being goofy and carefree while living outside the box so many have tried to put me in.”

Her Twitch show, The Blunt Doctor is an example of that statement in real-life action. In The Blunt Doctor, Lisa has created the character of Dr. Lisa Backwood, a top medical surgeon who leads The Blunt Trauma Department at a prominent hospital. She does the most important and serious work of teaching people how to save their blunts. The Twitch show airing on the Chicago4Real channel allows you to get a BTS look into her world.

Often visited by her friend who may also be other marijuana medical professionals like DeWayne Perkins or Dr. Tash aka Natasha Forouzannia on Weed Reiki, Lisa chatted with #blkcreatives about her clever cannabis character themed show aka Grey’s Anatomy meets Doc McStuffins for adults.

Creative note: We did this interview via TEXT MESSAGE.

Because of the era our country is currently in, much of the content we see is political or Black Lives Matter driven which can burden those who have already had to live it. Was it a conscious choice for you to create something outside of that lens? And if so how did you give yourself permission to do that?

Lisa: I think the way I show my Black life mattering is by creating content that brings me joy. Also, for a Black woman to build an entire character around cannabis is political for me. I call this my “War on The War on Drugs.”

I’ve seen a lot of people killed, jailed and heavily stigmatized because of the way the government politicized cannabis.

As for the content itself, people are tired of hearing 45’s voice, seeing his face and living in a constant reminder that we are still fighting for the civil rights of sooooo many different groups of people.

I’m also the baby of the family so naturally that makes me the comedian of the family. When things got rough, I was always trying to cheer everyone up. This is what I realize I’m doing now. I needed to bring myself joy AND I’m like “everybody look at this….smile…haha…isn’t this different than doom and destruction?”

Creating content around weed can be seen as bold considering the criminalization of it for Black and Brown people. How do you prioritize your creative freedom and joy over the society’s view of Black people and weed?

I tried pitching to Hollywood stories about cannabis starring myself. The stigma is so heavy that they didn’t want to portray me as a drug addict. I would go, “whoa whoa who said anything about being a crackhead!?”

Mind you, there are several goofy weed-centered movies starring men that actually exaggerates the stoner trope. I want that same type of freedom to be able to create whatever I want without fear of judgment. People are gonna judge what you make anyway – might as well make something YOU actually like. I love Grey’s Anatomy and cannabis. Spending time with both is a great way to spend my time and I’m happy The Blunt Doctor was created out of two things I sincerely enjoy.

"I love Grey’s Anatomy and cannabis. Spending time with both is a great way to spend my time and I’m happy The Blunt Doctor was created out of two things I sincerely enjoy." – @lisabexperience via #blkcreatives Click To Tweet

What makes you most excited about The Blunt Doctor?

YO I’m most excited about people legit learning how to fix their blunts and roll better. In the old world, when people could smoke together pre-covid, people would always wonder why I rolled great blunts. I’ve taught a few people and they can roll better than me now.

Also, there is nothing worse than being down to your last blunt and that thing breaks, tears or has holes. It’s fixable! It’s a silly concept for a show, but people will really learn how to heal their blunts.

There’s an all-new #TheBluntDoctor LIVE this Friday, December 4th at 9p CST/10pm EST and it’s the Edible Edition watch it live on Twitch!

More from Lisa and more smart, skillful, and compassionate Black creatives on owning your creativity.